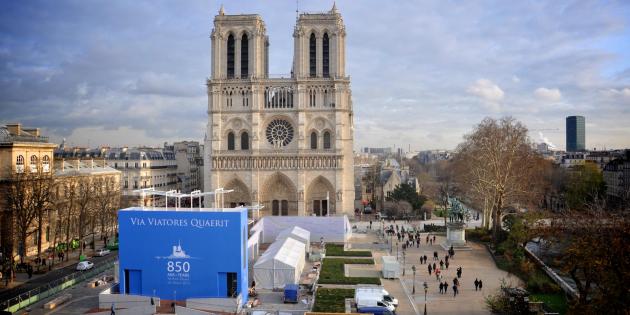 A leading spiritual centre and the most popular historic monument in France, Notre-Dame de Paris celebrates its 850th anniversary in 2013. The cathedral is one of the most famous buildings in the world, attracting 14 million visitors every year. Located on the Ile de la Cité, close to the banks of the Seine and just a stone’s throw from the Sainte-Chapelle and the Conciergerie, it is one of the symbols of the French capital and an integral part of national and international heritage. Numerous festivities, cultural events, ceremonies, special occasions and large-scale projects offer an opportunity to discover the cathedral in a brand new light.

Every year, Notre-Dame de Paris attracts numerous visitors and believers from all over the world to admire the three monumental doors and the legendary references to the devil in their sculpture and ironwork, the Gallery of Kings and the relics, including the true Crown of Thorns. Immortalised by Victor Hugo in his famous novel, Notre-Dame de Paris (The Hunchback of Notre-Dame), the cathedral was restored in the mid-19th century by Viollet-le-Duc, whose famous gargoyles and fabulous sculptures you can still admire today, provided you are willing to climb the 387 steps up to the top of the towers.

The history of the cathedral dates back to 1163, when Pope Alexander III laid the first stone in the presence of King Louis VII. The bulk of the work was carried out under the supervision of Bishop Maurice de Sully and his successor, Odon de Sully. The cathedral was built in a century and quickly became one of the most admired monuments in France, symbolising both the Church and the City of Paris. At the end of the 12th century and throughout the first part of the 13th century it was also seen as the greatest Christian edifice in the western world. 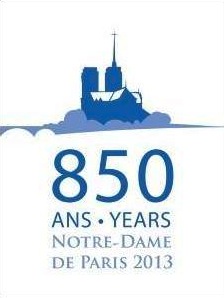 2013 therefore marks the 850th anniversary of the start of building this jewel in the crown of Gothic architecture. The events planned to celebrate the anniversary have been placed under the patronage of the French President and the Cardinal Archbishop of Paris, but also the Ministry of Culture and Communications and Paris City Hall. The budget for the 850th anniversary of Notre-Dame de Paris is €6.5 million, excluding works covered by the French government.

The cathedral has treated itself to a face lift to mark its anniversary, with some exceptional work carried out aimed not only at maintaining but also glorifying this architectural masterpiece. The new bells in the North Tower and the Marie tenor bell in the South Tower are one of the main projects. Nine giant bells (representing six tonnes of copper and tin) made in the Cornille Havard foundry in Villedieu-les-Poêles (Manche) and the Royal Eijbouts foundry in Asten (Netherlands) will ring for the first time on 23 March 2013, the day before Palm Sunday. This ambitious project, which has cost €2 million funded entirely by donations, means that the cathedral bells will ring out in just the same way they did at the end of the 18th century.

The square in front of Notre-Dame de Paris has also been transformed: the Jubilee Path will invite visitors to take part in a real pilgrimage until 24 November 2013. The 1,200 m2 space will be filled with four huge temporary installations. The 20 million people who walk through the square every year will be able to climb the belfry (an impressive, 13-metre-high tower) where they will discover the stained-glass windows of Geneviève and Marcel, the guardians of the city, a work by master glassmaker Jacques Le Chevallier. Once they reach the panoramic viewpoint, visitors will be able to contemplate the cathedral from an unusual angle, 5.50 metres up.

Another of the projects completed to mark the cathedral’s 850th anniversary is the renovation of the internal lighting. Among other things, the new lighting will offer a clearer view of the internal decorations and the new museography of the collections in the Treasury of Notre-Dame, which preserves liturgical items used in the Catholic Church. The celebrations have also provided an opportunity to complete other projects, such as the renovation of the great organ, which began in 2012 and has involved cleaning 12,000 pipes, some of which date from the Middle Ages.

“The lectures, exhibitions, concerts and son et lumière running throughout the year are some of the exceptional cultural events that will show the cathedral in an entirely new light,” according to a senior member of the Notre-Dame de Paris 2013 Association, which is in charge of the festivities. World Organ Day, a unique event planned for 6 May 2013, will be marked by 850 concerts in cathedrals, churches, places of worship of all denominations and concert halls all over the world.