Home > News > Transform your iPad into a notebook with the help of a French (...)

ISKN was looking for investors for the iSketchnote, an innovation which enables users to digitize their sketches and notes in real time while keeping the pleasure of writing.

The iSketchnote is a smart iPad cover that integrates a new digitizing technology which locates with high precision the pen’s movement on the notebook. 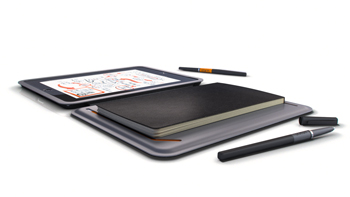 iSketchnote transforms iPad into a notebook

The invention had a lot of success! Just fifteen hours after the start of the Kickstarter campaign, the amount of participations had already surpassed the initial goal of $35 000, and the campaign finally reached $346 127 one month later.

For Jean-Luc Vallejo, ISKN president and co-founder, iSketchnote is the proof that ’’We are today at the beginning of a paradigm’s change where the border between numeric world and physical/material world is opening and is creating simple and creative interactions between these two worlds.’’

ISKN is planning a setting up in California in 2014.