Be sure to catch the French aerobatic jet team, Patrouille de France, as they tour the U.S. from March 19 until May 4!

31 years since its last tour in North America, the Patrouille de France is coming back to the USA from March 17th to May 6th 2017 to commemorate the 100th anniversary of the United States entry into World War I and to reaffirm the historic ties between France and the United States.

During this month-and-a-half long journey, the Patrouille de France will perform 30 transit flights and 12 demonstration flights during commemorations and air shows, meet the 2 mythical demonstration teams Thunderbirds and Blue Angels and fly over 9 symbolic monuments of the Franco-American relationship, such as the Statue of Liberty in New York.

Among the highlights of the tour, the Patrouille de France will participate in the centennial commemoration of the US entry into World War I, on April 6th in Kansas City (Missouri). This symbolizes the enduring friendship and unfailing brotherhood of the two countries. The operational cooperation between France and the United States, major partners in the fight against terrorism, is now at an unprecedented level.

On April 21st the Patrouille de France will also join the French Air Force Rafale, presently participating in TEI exercise (Trilateral exercise initiative) at Langley Air Force Base, Virginia. This advanced exercise prepares American, British and French Air Forces to engage jointly in highly contested scenarios. The engagement of the most advanced fighters (F-22, F-35, Rafale, Typhoon) is a testament to the high level of interoperability and mutual trust between the three partners.

See the Patrouille de France in the US Southwest: 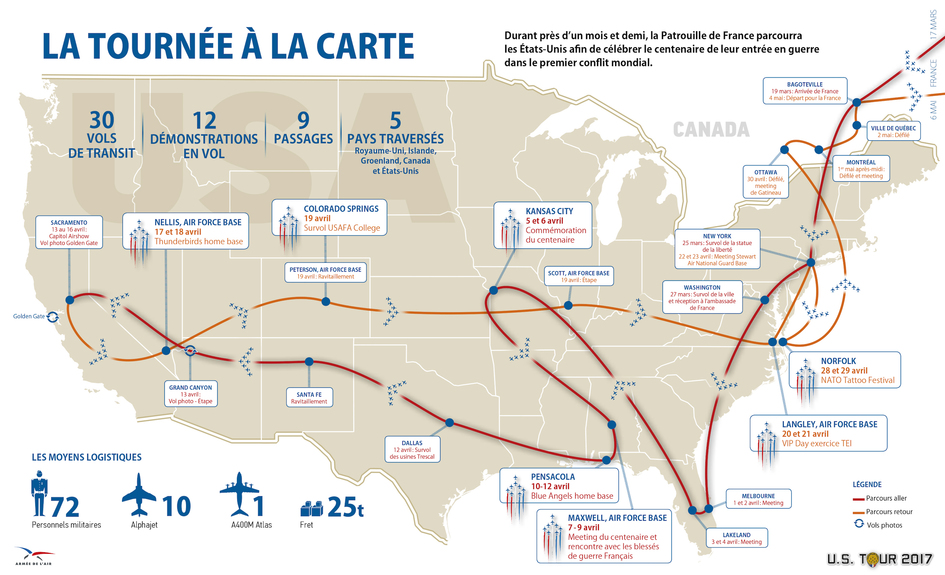