Interview of Eleanor Coppola, director of Paris Can Wait 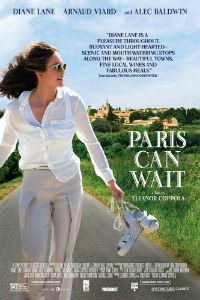 An exclusive interview with Eleanor Coppola for the release of her new film, Paris Can Wait, on May 12th, 2017.

1) Directing a first narrative feature in France is an extraordinary challenge. How would you describe the specificities of filming in France compared to the US?

I never made a narrative film in the U.S., but I was witness to many productions and from my experience, I was very impressed with the French crew and production team. I worked with the French production company, Elzevir, and found them very professional, honest, and helpful. I had chosen some of the heads of departments I wanted to work with beforehand and Elzevir introduced me to the remaining crew needed. I was impressed that everyone spoke English well. I was concerned that, since I don’t speak French, it would be hopelessly hard for me. It wasn’t. I had a great experience!

I had heard that French crews were slower than American crews and worked shorter hours. I found the work fast and professional and shooting was completed on schedule.

One big difference between making a narrative movie and a documentary from the technical side, is the crew of collaborators is so much larger. I was used to working with a crew of only one or two so I was concerned that I wouldn’t know how to manage a large team. Each department was very experienced and professional and guided me when needed.

2) Were there any incentives, such as the Tax Rebate for International Production (TRIP), as well as other financial support mechanisms for movie production, that drove your choice to shoot in France?

My choice to shoot in France wasn’t driven by incentives. It was a story set in real places in France and I didn’t want to make the movie if I couldn’t shoot in France. I learned about TRIP and applied for it, it provided up to a 20% rebate. My production qualified for 16%, which was a tremendous help. Because we applied for TRIP, we were not eligible for regional or other subsidies.

3) What is your advice for an American or international director who is considering to work with French professionals?

My experience was excellent. I Would recommend to a foreign director to select a fine French team and not try/expect to do things the way they are used to doing them in their county. For the best result, don’t try to mix methods.