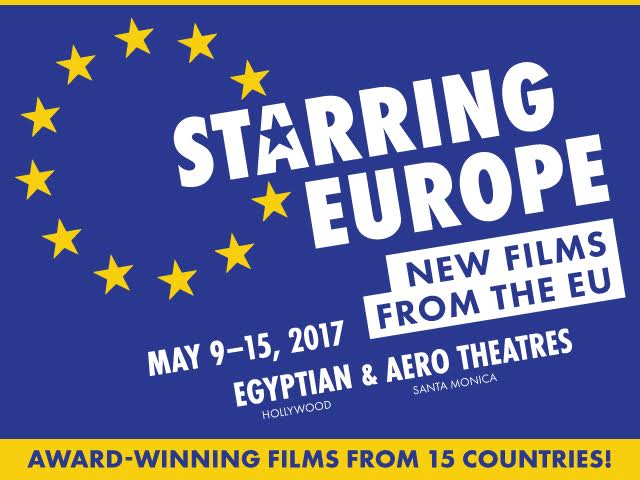 Sponsored by Bank of the West, with additional support from BMW, Dream Racing, DWF and Otto Nemenz International Inc.

This year’s EU festival offers a golden opportunity to see some of international cinema’s rising stars in person. Director Renārs Vimba joins us on opening night for a discussion of MELLOW MUD. It’s a Los Angeles premiere, as is our closing-night feature, OUR LAST; director Ludovico Di Martino joins us for a post-screening Q&A. Jan Hřebejk, director of the Oscar-nominated DIVIDED WE FALL, appears with his new film THE TEACHER, a powerful drama set in a 1980s middle school. Performers who will be joining us in person include LITTLE WING star Paula Vesala and OUR LAST actor Guglielmo Poggi, Da Vinci’s Horse Award Winner at MIFF as Best Actor.

These seven nights include a broad range of styles and genres. Marina Seresesky’s THE OPEN DOOR (one of six films by female directors) is a domestic drama set among Madrid sex workers, while Christophe Wagner’s TOMORROW AFTER THE WAR is a mystery plumbing post-WWII divisions. On a lighter note, Los Angeles audiences will get their first looks at Justine Triet’s romantic comedy IN BED WITH VICTORIA and Rainer Sarnet’s NOVEMBER, a magical tale of farmers who co-exist with supernatural creatures. Each feature has been paired with a complementary short film. Among the most noteworthy are "Sing," which took home this year’s Best Live-Action Short Oscar. The German short "Invention of Trust" was a 2016 Student Academy Award winner, while Croatia’s "Flowers" was a Student Oscar nominee. Christopher Rainer, the director of "Pitter Patter Goes My Heart" will join us in person with his short. View Schedule on our Website.

2016, Hungary, 25 min. Dir. Kristóf Deák. In this Live Action Oscar-winning short, two young girls take down a bullying teacher with the power of their friendship. "Celebrates the small triumphs over injustice that renew everybody’s faith in life." International Film Journal.

(ES ESMU SEIT) 2016, Latvia, 106 min. Director Renārs Vimba. Director Renārs Vimba’s debut feature follows Raja (Elina Vaska), struggling to escape her grueling life and find her mother, who had emigrated to England. An English-language Olympiad may provide the young woman the means to buy a plane ticket to London in this bittersweet coming-of-age tale. Newcomer Vaska was selected as one of the EFP Shooting Stars at the Berlin International Film Festival 2017. "Knockout performance from big-screen debutant Elina Vaska, who conveys her character’s feeling of anger, abandonment, responsibility and first love with conviction and authenticity." - Alissa Simon, Variety. In Latvian with English subtitles.

Reception in the courtyard starting at 6:00 PM. Discussion after the feature with MELLOW MUD director Renārs Vimba. With the support of D’Aquino Italian Importing Co. and Matteo Pasquini Espresso.

2016, Poland, 19 min. Dir. Zofia Kowalewska. In this winner of the Silver Dragon at the Krakow Film Festival 2016, the 21-year-old filmmaker explores the tensions that rise as her grandparents struggle to cohabitate after being separated for a long time.

Co-presented with Czech That Film

The Teacher trailer from Martin Žiaran on Vimeo.

(UČITELKA) 2016, Czech Republic, 102 min. Dir. Jan Hřebejk. The director of the Oscar-nominated DIVIDED WE FALL returns with a refreshing look at corruption and power in a 1980s Bratislava middle school. Inspired by real-life events in Hřebejk’s life, the film follows a charismatic, but cunning teacher as she turns the lives of her students and their parents into chaos. "Intelligent and universally resonant crowd-pleaser." - Alissa Simon, Variety. In Slovak with English subtitles.

Discussion after the feature with THE TEACHER director Jan Hřebejk.

I’M NOT FROM HERE - Lithuania

2015, Lithuania, 26 min. Dirs. Maite Alberdi, Giedrė Žickyte. A Basque woman is stranded in an old people’s home in Chile, but there is more than meets the eye in this documentary, which won the Best Short Doc Award at Sheffield Doc Fest.

TOMORROW AFTER THE WAR - Luxembourg

(ENG NEI ZÄIT) 2015, Luxembourg, 107 min. Dir. Christophe Wagner. Jules returns to his hometown in Luxembourg after WWII only to find a country deeply divided from four years of occupation. The young man finds work as auxiliary policeman - a job that becomes extraordinarily challenging when he must investigate the murder of his girlfriend and her employer’s German family. Best Director winner at the 2016 Trophées Francophones du Cinéma. In Luxembourgish with English subtitles.

2015, Austria, 21 min. Dir. Christoph Rainer. Lisa is a hopeless romantic who will take desperate measures to win her former lover back in this Best Short Film winner at Max Ophüls Festival 2016.

IN BED WITH VICTORIA - France

2016, France, 97 min. Dir. Justine Triet. This romantic comedy about a lawyer whose life falls apart after she takes on a case defending her ex-boyfriend was nominated for five César Awards in 2017 including Best Original Screenplay and Best Film. "A chaotic mid-life crisis comedy anchored by a vibrant lead performance." - Jordan Mintzer, The Hollywood Reporter. In French with English subtitles.

(TYTTÖ NIMELTÄ VARPU) 2016, Finland, 100 min. Director Selma Vilhunen. Director Selma Vilhunen’s debut feature is an uplifting story about a young girl who decides to track down her father after being disappointed by her immature mother. Like its teenage heroine, the film tackles issues such as bullying, poverty and mental illness with considerable maturity and respect. Nominated for ten Jussi Awards this year. "A tender-hearted coming-of-age story shot in a low-key, realist style." - Alissa Simon, Variety. In Finnish with English subtitles.

Discussion after the feature with LITTLE WING actress Paula Vesala.

2017, Estonia, 115 min. Dir. Rainer Sarnet. This adaptation of Andrus Kivirähk’s novel Rehepappfollows the lives of pragmatic farmers who co-exist with werewolves, ghosts and the plague in a strange, intriguing tale that boasts a very distinctive visual style. A mixture of magic and romantic comedy, NOVEMBER is making its North American premiere in the International Narrative Competition at the Tribeca Film Festival 2017. In Estonian and German with English subtitles.

LE PLOMBIER (The Plumber) Trailer from oriGine films on Vimeo.

2016, Germany, 30 min. Dir. Alex Schaad. Cyber security gets personal in this 2016 Student Academy Award winner. An unassuming high-school teacher’s life is turned upside down when he is blackmailed by a website offering his entire online history for sale.

ARFF// Winners Jun.2016 from Around Films on Vimeo.

2015, Italy, 90 min. Dir. Ludovico Di Martino. When their mother suddenly dies, two brothers want to fulfill her last wish to visit Sicily, and make their final family vacation an impromptu road trip with her coffin tied to the roof of their car. This family drama won the award for Best Film at the Ferrara Film Festival in 2016.In Italian with English subtitles.