Home > French American Relations > WWII Veterans > What is the Legion of Honor?

What is the Legion of Honor?

The French Legion of Honor was created to reward eminent military and civil merits in the service of France. It is the highest distinction that can be conferred in France on a French citizen as well as on a foreigner.

Napoléon Bonaparte, First Consul of the First Republic, first established the French Legion of Honor in 1802.

The Legion of Honor is divided into fives degrees.

Description of the Insignia 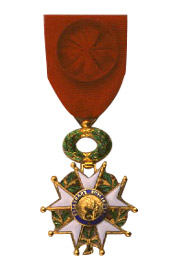 Since its inception, the medal consists of a five-armed “Maltese Asterisk” enameled in white, joined with branches of laurel and oak.

The ribbon is in red moiré silk.

Organization of the Order

The President of the French Republic is the Grand Master of the Order and appoints all other members of the Order—by convention, on the advice of the Government. Its principal officers are the Chancellor and Secretary-General.

A chancery and a council of the order manage the order. They are located in Paris:

In the United States, the American Society of the French Legion of Honor, Inc., that gathers all the recipients of the award, is presided by