How does a country’s soft power influence its global standing and international relations in an increasingly volatile environment? Town Hall Los Angeles and USC Center on Public Diplomacy brought together leading practitioners in Los Angeles to explore innovative ways nations are developing and deploying their soft power assets with far reaching global consequences.

Since 2015, Portland Communications has produced the Soft Power 30 ranking of nations which combines both objective metrics of countries’ soft power resources, spanning government, culture, education, global engagement, enterprise and digital, and subjective international polling data — making it the world’s most comprehensive and accurate index of soft power to date. 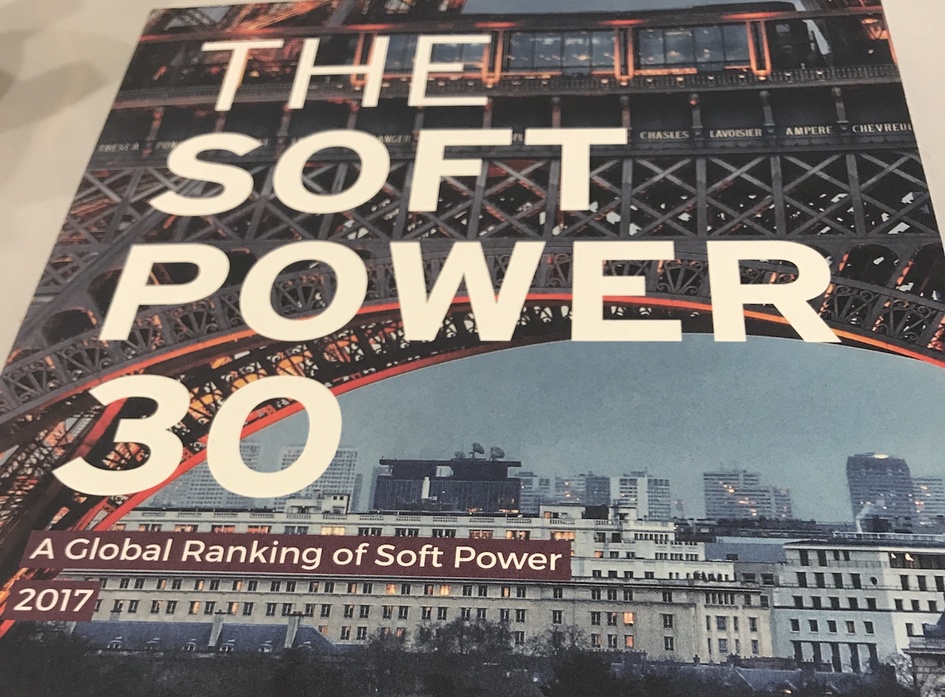 Conversations on October 12th with speakers from Portland and some of the leading soft-power nations profiled in the report: 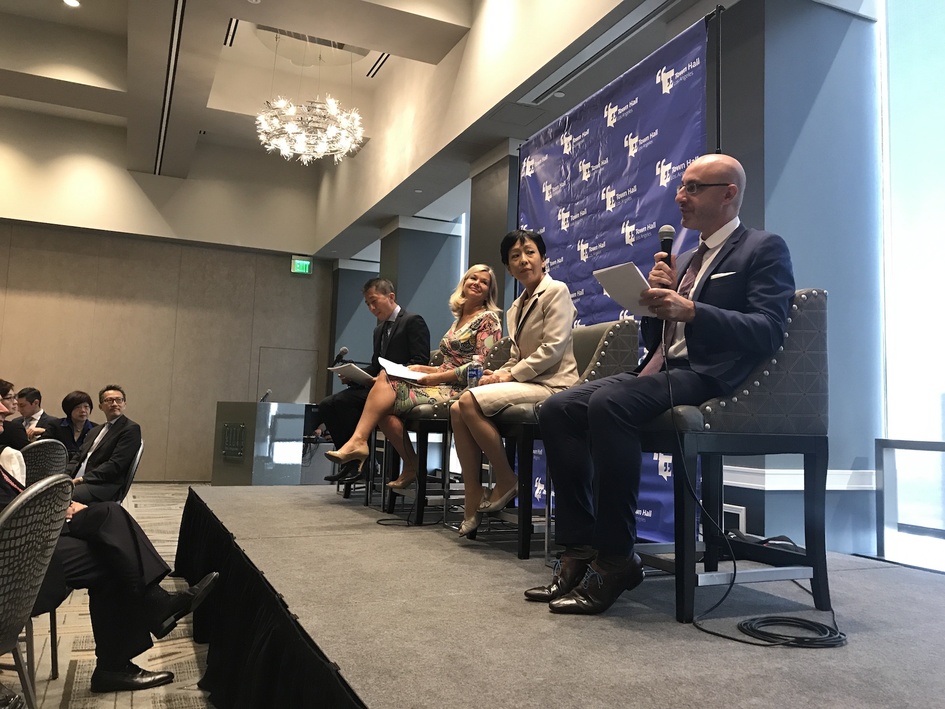 According to The Soft Power 30, France ranked the new world leader in "soft power".

Soft power, a term first used by the American political scientist Joseph Nye, combines the use of political values, culture, and foreign policy rather than coercion to influence the world stage.

The report says France’s rise from fifth to first is explained by President Emmanuel Macron’s overwhelming election victory as well as the country’s "unrivaled" vast diplomatic network, as well how the country is perceived abroad.

Ladies and gentlemen, My dear colleagues,

It is my pleasure to be among you today on the occasion of this program. First of all, I’d like to thank in particular the USC Center on Public Diplomacy and Town Hall Los Angeles for organizing this event today.   The USC Center on Public Diplomacy is renowned worldwide for its academic excellence and the high quality of its conferences. Town Hall Los Angeles provides us a fundamental platform for discussing today’s most pressing issues. You’ll see I can’t get rid of my French accent, and somehow, I hope it won’t be too difficult to understand me! I could try to convince you it is included in our French art de vivre and soft power but I am not so sure …..

I am going to start as a citizen, if you don’t mind, and not as a diplomat. Truth be told, I didn’t sleep much at the end of 2016 and the first six months of 2017.   I’ve been voting for over 25 years and I’ve never felt such tension. In fact, I’ve never been so afraid. All the elements were there to head right into a catastrophe. Nationalist movements everywhere, war in Syria and its consequences, terrorist attacks in France and Europe, war in the Ukraine, which is a part of our European continent, high unemployment rates and doubts about the European project.

And globally, terrible doubt among the middle class, the blue-collar class, employees, retirees, the poor and, especially white males. Is globalization going to destroy us? What is the future for our civilization, for humanity?   How can we survive if the robotization of our economy destroys our jobs? Why don’t politicians protect us? What is the future for our children if inequalities rise year after year? Where will we live if housing continues to rocket?

France, as you may know, is a “very specific country”, with a strong past, some dark moments too. France may have used the concept of soft power for several centuries without knowing it. We are what we call « la patrie des lumières », the country of light and human rights. Philosophy, literature, music, poetry have been deeply rooted in our daily life, in our education, in the way we work and think. It is so rich and it is a marvelous opportunity to be raised or to live a few years in this country, in the middle of our culture, our food, our wines, our literature, and our love for intellectual discussions at any time of the day or night, our need to discuss and rethink each concept all the time.   The French language has been and still is an important diplomatic language. Paris is the most visited city in the world, even if I always ask visitors “how did the Parisians treat you?” And I am always surprised by the answer…

We have the third largest diplomatic network in the world, after the US and China. Since 1833, we have tried to build a cultural and educational diplomacy. The cultural sector represents in France 120 billion dollars of net sales and twice more employees than in the car industry.   France’s soft power includes our government, culture, cuisine – including the number of Michelin-starred restaurants – foreign policy, sporting prowess, digital engagement, perceived capacity for economic innovation, and attractiveness for both tourists and foreign students, as well as the ability to harness international alliances.

The influence of individuals and smaller civilian society groups is very important, especially the NGOs. Cities are increasingly active and influential in many issues; the cooperation between Los Angeles, Paris and France to implement the Paris agreement on climate is a perfect example.   Our capacity to understand new digital tools and to accept their increased penetration is fundamental too. All diplomats have been forced to work on this aspect. We are so thrilled the International Olympic Committee nominated Paris as host city for the 2024 games, one century after the city hosted the Olympics for the last time. And it is for us a huge opportunity to create new alliances and projects with 2028 Los Angeles.

But, to understand how we could be #1 in soft power after two years of attacks and with the rise of the extreme-right all over the world, we have to keep in mind that the French people need a very specific balance to survive…  an ideal of liberty, equality, tolerance and reason. But you have to add a concept that can’t be translated in English and that we call “laïcité”. It is much stronger than “secularism” and implies that we go beyond our differences to create our nation-building.

And at the same time, we are a country of profound and permanent doubt. We have a strong history and capacity to hide our excellences and to concentrate on our challenges. It can be quite disconcerting for our friends. We doubt all the time, we know where we come from and are never satisfied by what we build. And sometimes we are the country of « coups de sang » - there is no easy translation for this expression in English.

At the same time, all the extreme-right parties were winning one election after the other, racism and anti-Semitism are on the rise in so many countries, the UK rejects the European Union and decides to Brexit, when nobody wants to be moderate or compromise, and everybody wants to be passionate…the French people unify all their strengths, all their will, and vote in favor of a young President, a centrist, pro-European standard-bearer of democratic values.

If you want to be elected, I think in France like in the US, you normally have to make the people dream. And very often politicians prefer to lie a little bit, so as not to kill hope.

Macron was surprisingly elected by saying that fears are still there and what divides societies is still there. That there are no magic solutions; it’s a combat for every day. He said the issue was to appeal to the intelligence of citizens. What exhausts democracies is politicians who think their fellow citizens are stupid.

The crisis of western imagination is a huge challenge and it’s not one person alone who will change it. But, we want to bring back the line of history and energy of the European people, to hold back the rise of extremes and demagoguery, because that’s a battle of civilization. His hallmark, at the international level, is to see the return of France’s strength and ambition. That concerns outreach and culture, and defending our values. And of course, all that will be tied in with a renewed European dimension. We live what we call in French “un moment charnière de notre histoire”, a central and fundamental turning point.

We have to protect the working class from the effects of globalization. The key to reconciling European people with the European project is to tighten rules on workers and make it harder for companies to employ cheaper labor from other EU countries. National egoisms are slow poisons that bring about the weakening of democracies and a collective inability to rise up to our historic challenge.

President Macron hopes this election is the start of a French renaissance, and maybe a European one.   A renaissance that will enable us to rethink the great national, European and international balances, to regain ambition, the ability to look at things head-on, not to play on fears but to transform them into energy – because the fears are there, and so what divides societies remains.

There’s no magic bullet; it’s a daily battle. The West’s crisis of imagination is a huge challenge, and one person won’t change it. But he wants to try to reconnect with the European people’s history and energy, in order to stem the rise of extremes and demagoguery, because that’s the battle of civilization.

This intense period we are living nowadays affects the concept of soft power too. With the rise of nationalism and the doubts on multilateralism, there is a temptation for some countries to show their muscle more often.

It raises an interesting question: Can too much hard power kill the soft power? “Soft” is by definition non coercive. But for that you need credibility. From our experience, it takes a lot for time and energy to create a solid base to strengthen your soft power. Conversely, to lose credibility can be very quick.   That is the reason why it is so important to set the agenda and attract others in world politics, and not only to force them to change by threatening military force or economic sanctions.

But soft power is not an end in itself. Hitler or Stalin possessed a great deal of soft power but it didn’t bring any good to humanity or even their country. So, we always have to wonder: What is the objective being pursued? It can’t be only to promote its nationalistic interests, its vision of the world. It has to be to promote a new style, new concepts, a vision of our capacity to coexist together in peace. And for France a pro-European, open-to-the-world message at the same time several people choose nationalistic or regionalist withdrawal. For Germany, it was maybe to promote and believe in an open spirit to refugees when others called to reject any form of migration.

In conclusion, soft power can be a fragile but precious tool, a tool to better protect our people, to give them hope and maybe dreams when there is darkness, a way to draw strength from our common history, diverse rich cultures and shared vision of the future, to share our intellectual heritage, what makes the best of us. 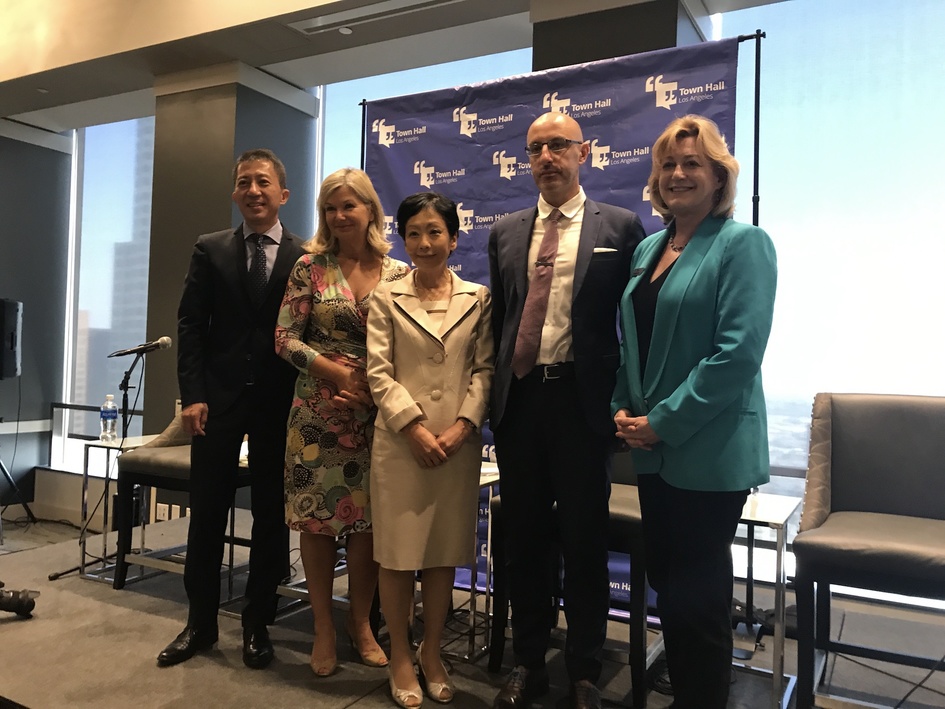