Remembering the Events of WWI, 100 Years Ago. Please join us at 10 am on Sunday November 11th at the Los Angeles National Cemetery, during a public event to commemorate the Armistice of the First World War.

The French Consulate will be awarding the Legion of Honor medal to four WWII veterans and the choir from the Lycée Français de Los Angeles will be performing the French National Anthem, La Marseillaise. 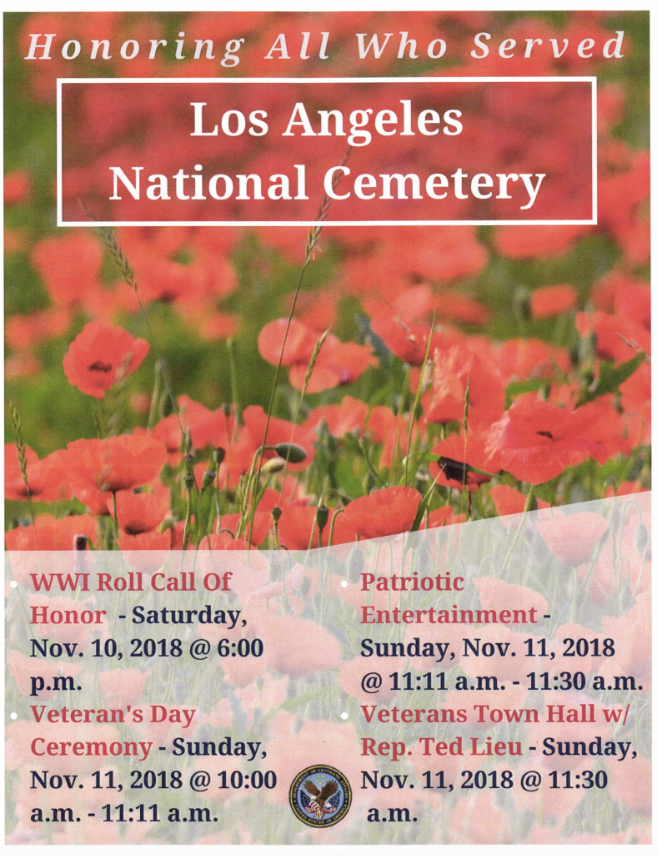 The Government of France is pleased to announce that the four World War II veterans listed below from Southern California have been approved for the award of The National Order of The Legion of Honor in the rank of Chevalier (Knight). The award is the highest honor France bestows on its citizens and foreign nationals.

The presentations will be made by the Hon. Christophe Lemoine, Consul General of France in Los Angeles, as part of the commemoration ceremonies for Veterans Day and the World War I Armistice 100th Anniversary to be held on November 11th at 10:00 a.m. at the Los Angeles National Cemetery, 950 South Sepulveda Blvd., Los Angeles, CA 90049.

Private First Class Ventura H. De La Torre, U.S. Army, was born in Los Angeles, California in June 1924. In World War II he served as howitzer truck driver with the 317th Infantry Regiment of the 80th Infantry Division. His significant decorations include the Bronze Star Medal, the Purple Heart Medal the EAME Campaign Medal with four battle stars, and the Combat Infantryman Badge. Ventura resides in Fullerton, California and with his late wife Esther of 62 years their family includes a son, two daughters, and five grandchildren.