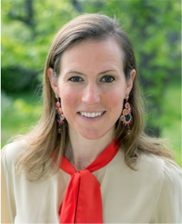 Mrs Duhaut-Bedos is a career diplomat of the French Ministry of Europe and Foreign Affairs.

She joined the French Ministry of Foreign Affairs in 2001. Since then, she has served as Desk officer at the North Africa and Middle East Division, first for Gulf Countries (2001-2003) and then for Tunisia and Libya (2003-2005). She was appointed as Political and Press Counsellor at the French Embassy in Tunis (2005-2009). She also served as Spokesperson/Press Counsellor at the French Embassy in Ottawa, Canada (2009-2013).

She then served in Paris from 2013 to 2016 at the Department of Human Resources, where she was in charge of high rank diplomats’ careers and appointments, “E360” evaluation and feminization of the management in the French Ministry of Foreign Affairs.

Prior to her posting in Los Angeles, she was the Deputy Head of Mission at the French Embassy in Australia.

Julie Duhaut-Bedos is a graduate of Sciences-Po Paris and holds a degree in English.

She has been awarded the distinction of Knight in the French National Order of Merit in 2019.

The Consul General of France addresses the French community